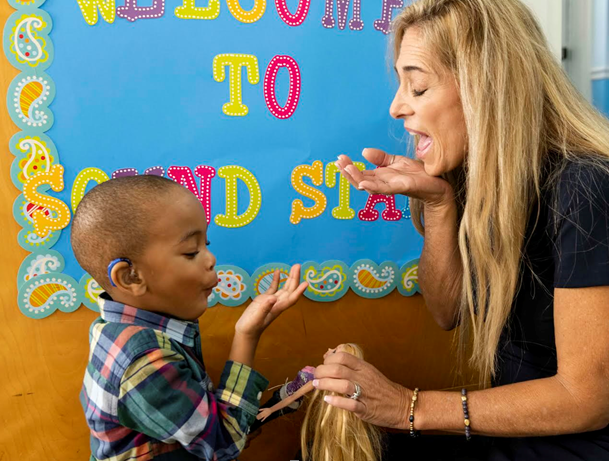 Teachers are a special group of individuals put upon this earth to share wisdom and knowledge in such a way that others can both comprehend and apply what has been imparted. Not only are they essential for their roles in shaping young minds, but also for being the role models remembered in the hearts and minds of the lives they touch. Among these special people exists a unique minority, though, and there is an extra special place reserved in the heart for them. What they do requires a level of patience and understanding that few can claim. They improve the lives of children with disabilities on a daily basis. Tracy Edenfield is one of these phenomenal people.

Born in Savannah at Mary Telfair Women’s Hospital, Tracy is a local gal who calls Effingham home. She was raised and went through school in Guyton. Always an above average student, she was able to dual enroll in Southeastern Bible College during her senior year at Effingham High School. It wasn’t but a quarter or two into the year that she had already completed all the requirements necessary to graduate high school, and three years later she had earned her first degree. “I believe that I am called to teach…”, Tracy began, “I’ve always felt the tug of the Lord calling me into the field of teaching.”

In fact, Tracy not only knew she wanted to teach from a young age, she also knew who she wanted to teach. She specifically wanted to teach and help individuals who were hearing impaired and profoundly deaf. When she was quite small, Tracy began learning how to communicate with her Aunt Ann (who she fondly calls Annabelle) who was profoundly deaf and blind. She is extremely fond of Annabelle and resolved to develop the skills that would enable her to not only communicate well with her aunt, but also help Tracy to teach others with similar disabilities. She learned from her aunt that being born different had no bearing on what could be accomplish. “She was very self taught and so driven,” Tracy said of Annabelle, who was quite clearly one of her heroes. That drive and tenacity was all the encouragement Tracy needed to reach and far exceed each educational and personal goal she chose to set for herself.

In the early 1990s Tracy began taking American Sign Language courses with Savannah Speech & Hearing Center. She learned from Hazel Davis, an instructor she holds in high esteem, and she loved every aspect of it. She did it for about five years, and doesn’t remember how many classes she actually took there. “It was more of an ongoing learning process,” Tracy recalled. Ms. Davis taught classes but also prepared her students for certification and other test necessary to obtain the credentials needed to use their signing skills in education.

By the mid 1990s, a sufficiently educated Tracy Edenfield accepted a position as an interpreter for a profoundly deaf student attending Effingham Middle School.  After two years interpreting for the student, she decided to pursue a bachelor’s degree in speech at AASU (Armstrong Atlantic State University), and was offered a job at Ebenezer Middle School. Upon accepting the job offer, she soon learned that it wasn’t teaching speech, as she’d originally thought, but, instead, teaching deaf education. The school allowed her to teach provisionally until she completed her second degree, however, an intrigued Tracy Edenfield worked just one year in deaf education and discovered her niche. She transferred from AASU’s Masters of Speech Degree program to GSU’s (Georgia Southern University) Master’s of Reading Degree program. After earning her Master’s she stayed to earn her six-year Reading Specialist Degree. She liked it so much that she returned to Armstrong to earn an additional Master’s of Adult Literacy Degree as well.

After a brief hiatus from her career and school, Tracy was asked to teach in a new program with a different approach to teaching the hearing impaired and profoundly deaf. Technology had much advanced through the years and many infants, and adults as well, underwent surgery to receive cochlear implants. The implant allowed them to hear for the first time, which opened many doors for language development. Tracy was intrigued by the possibility that children who were born deaf possibly could progress normally through school and life without exclusive dependency on American Sign Language. Tracy remembered thinking, “Can it be? Can it really be that profoundly deaf children are reading on grade and age appropriate levels, speaking vocabulary and listening on age appropriate levels, ready for Kindergarten and ready for 1st grade with their hearing peers?” Eager to become part of something so life changing and wonderful, she accepted a position in the Sound Start program offered by Savannah Speech & Hearing Center, under the direction of Dr. Beth McIntosh.

“When profoundly deaf children were implanted, their resource choices were limited. They had to go to Jacksonville or Atlanta and their family was here in Savannah,” Tracy recalled. The directors of Savannah Speech & Hearing Center began planning a more local school, and soon the Sound Start program was born. The program has entered its eighth year and is still as strong as when it started – possibly stronger with regards to the families that have networked because of it. The students that attend the Sound Start program have received a cochlear implant by the first birthday. Because of the early intervention, Sound Start is able to use the student’s proverbial “blank slate” as an advantage for teaching them language in an auditory/oral style. The program operates on the premise of three bases: early intervention, amplification (whether it be hearing aids or cochlear implants) and very aggressive, intense therapy five days a week.

Witnessing Tracy in action with eight high energy and diverse little ones, who range in ages between two and six, is nothing short of inspiring. With patience and love, she guided them effortlessly through repetitious games and stories that would seem meaningless to many, but whose purpose was in fact essential. With her mouth covered, so her lips couldn’t be read, and with her eyes not looking at any one individual, Tracy was able to prompt each child into a response by speaking their name. She sang part of a song, stopped and the children would finish the lyrics – children who spent at least a year of their lives, some even longer, in complete silence. Tracy maintains that she is far from being the only person involved in what can only be described as miracle work. There are, of course, others who share Tracy’s passion such as the paraprofessionals, volunteers and very involved parents. She views their program as a large family, because the children learn in the same class together for years and emotional bonds form between the children, their parents and the teachers.

“Everyone is a team, that is how it’s successful. Our goal is to help them be ready for Kindergarten at five years old or 1st grade, according to where they fall, and to get them ready with minimal amounts of dependency on special education resources,” Tracy explained, “It is within their grasp and so obtainable now. “

“These kids, mostly born to hearing parents, are actually going into Kindergarten ready to learn with their hearing peers,” she said. “This is just so passion driven, it’s purpose driven, but the passion… I love the kids, I love what the program stands for, I love the philosophy behind it and I love the outcomes. You can’t dispute the numbers. I mean the kids are going into regular education classrooms,” Tracy beamed. Tracy, in addition to teaching full time, also enjoys opportunities to teach at Maranatha Assembly of God. She even uses her skills with American Sign Language to arrange interpretive dances for programs in the church and community. She is grounded in her faith, and wants everything she does to reflect that. Knowing that God has given her a servant’s heart, she strives to uplift those around her and make a difference in the little lives that she encounters daily – letting God’s love show through her actions. To the children and parents whose lives are forever changed for the better, Tracy is Heaven sent. For Tracy, dedicating herself daily to ensuring that each hearing impaired or profoundly deaf child she teaches has every opportunity possible is simply her passion in life and where she finds true joy.