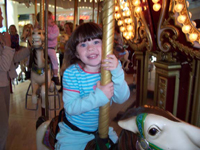 Six months ago, while her four-year old playmates were exuberant and playful, Kaitlin sat expressionless and quiet playing by herself. Her speech was limited to only two word utterances that may or may not have been understood, and she was not progressing with her language development. Having difficulty auditorily accessing the sounds, speech and language in her environment, Kaitlin was destined to enter the educational system as a handicapped individual, needing assistance in all academic areas. Sound Start was recommended.

Sound Start is an early intervention, auditory/verbal program for the deaf and hard-of-hearing. This much needed program for hearing impaired children in our community is offered by Savannah Speech & Hearing Center, in a coordinated effort with Calvary in Savannah. United Way of the Coastal Empire proudly supports this program to give children the ability to learn to listen, speak and understand spoken language using an auditory/oral approach. Children now have access to speech as never before with digital hearing aids and cochlear implants. Focusing on early intervention, this technology is utilized to its greatest potential to ensure success and independence in a mainstreamed educational setting.

Since enrolling in the Sound Start preschool program, Kaitlin has made an amazing progress. She now has a much more broad range of vocabulary and is initiating conversation and expressing herself with three to four new words, phrases or concepts every week. Kaitlin’s mother proudly exclaims, “The most wonderful accomplishment however, is seeing how confident our four year old little girl is in public and in social situations, instead of the expressionless little girl playing by herself.” Now, on their drive to school every morning, Kaitlin’s mom listens proudly as Kaitlin sings her morning songs, and they talk about what they see along the way.

It is through the generosity of United Way donors that young children like Kaitlin have the opportunity to participate in a program that literally changes their lives and the way others view and communicate with them in the future. Everyone deserves the opportunity to have a good life, and the United Way is focused on helping children and youth achieve their full potential through education.